Revolver by The Beatles 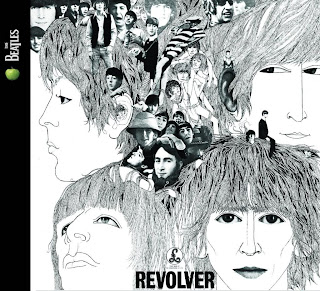 In 1966, by the time of being sick of touring, sick of interviews, TV Shows, and not to include the More Popular Than Jesus scandal. The Beatles went on and changed the world, once again.

(In my opinion) this album (and Sgt. Pepper too) was actually a change in musicology, with all its different songs, it stands out from the average '66 album. If not to mention Blonde on Blonde by Bob Dylan was also a change, as being the first rock double album.

Recording
And so, the Beatles went into the EMI Studios (now known as Abbey Road Studios), Wednesday April the 6th. Thinking ''new album, new opportunities''.
They started of with the last track; 'Tomorrow Never Knows', then known as 'Mark I'. First day they took three takes of 'Mark I'. In only three takes, the song had its shape as heard on the album. But before we continue, we must tell the story of the magnificent sounds. Geoff Emerick, was The Beatles' new engineer (although he joined EMI at the time of the Beatles' recording sessions for Please Please Me), 20 years old at the time, according to him;

"I moved the bass drum microphone much closer to the drum than had been done before. There's an early picture of The Beatles wearing a woolen jumper with four necks. I stuffed that inside the drum to deaden the sound. Then we put the sound through Fairchild 660 valve limiters and compressors. It became the sound of Revolver and Pepper really. Drums had never been heard like that before."

And Ringo's reaction? He loved it, there's no question of that. They
all loved the sounds. It was exactly what they wanted.

The cover artwork really impressed me when I bought it back in '66. There was thousands of Beatles pics glued on to a drawing. And this was made by the genius of Klaus Voormann, which the Beatles met back in Hamburg. John Lennon telephoned Klaus Voormann, inviting him to work on The Beatles' artwork.
He visited the group in the studio, where they played him the Revolver recordings for inspiration. The artist chose black and white in an act of rebellion against the fashion for psychedelic covers. He worked from his studio at 29 Parliament Hill, London, where for two weeks he developed his concepts using pen and ink.
Voormann wanted The Beatles' hair to be the focus, and drew likenesses of the group from memory. He then placed photos in and around the drawings.

The Beatles loved Voormann's "scrapbook collage" artwork, and the group's manager Brian Epstein was so overcome that he cried tears of joy. Voormann's payment for the album cover was just £40. He did, however, win Grammy Award for Best Album Cover, Graphic Arts in 1967.
Bizarrely, in Russia the album was issued with a different collage adorning Voorman's drawings.*

Revolver was named after the motion of a vinyl record as it was played, although there is an obvious double meaning which pleased the group. After the release many people asked about the title, which led John Lennon to say;


It's just a name for an LP, and there's no meaning to it. Why does everyone want a reason every time you move? It means Revolver. It's all the things that Revolver means, because that's what it means to us. Revolver and all the things we could think of to go with it.

The Beatles had some trouble settling on a name; their original title was Abracadabra, though this was later discarded. So Barry Miles (the Paul McCartney version of Mark Lewisohn) recalled;


Revolver did not mean a gun, but something that revolves, like a record. Johnny Dean, editor of Beatles Monthly, was with them on the night of 24 June 1966 in a Munich hotel room when they named the latter. At first they had all four wanted to call it Abracadabra, but someone had already used it. Pendulums and Fat Man and Bobby were other ideas. Ringo suggested having a joke with the Rolling Stones by calling it After Geography since the Stones had just done Aftermath! John proposed Beatles on Safari and Paul came up with Magic Circle. John changed this to Four Sides of the Circle and Four Sides of the Eternal Triangle, which somehow led them to Revolver.

Reception
First of all, the recording sessions were incredibly revolutionary with new instruments.

And the list of all the revolutionary things, which was awesome in anyway, the Revolver album still remains as the craziest Beatle album I've ever heard.

* If you noticed; in the middle of the russian cover, you see a photograph of John Lennon with a helmet, and you may wonder where the picture originates from; well, this picture was taken later under the filming for ''How I Won The War'', which was at the end of 1966.
Lagt inn av The Great Mippie kl. 03:57 Ingen kommentarer:

In 1968, in Long Island, New York, Steve Morgen formed the band simply called Morgen, to release their first and only album of their career. It was released in 1969, at the heat of psychedelia with a promotional single with songs from the album, even there was a single, the album failed to chart.

But now, some real information:

Steven Morgen went to college at the Long Island College, where he met a drummer; Ritchie, who introduced Murray Shriffin and Bobby Rizzo. Then Ritchie got replaced by Mike Ratti, and by then, they had been called The Dreame Spectrum.

Stu Krane, who just subsequently managed them, Got Morgen into a small studio owned by the bandleader Skitch Henderson and then by Deering Howe. It was located on East 57th Street, between Lexington and 3rd. The Morgen album was recorded with a fine engineer and Jimmy Reeves, ably assisted by Stephen Gelfand.

And now since the review is ''almost'' done, I bet you must question me;
- Where the heck did you find the album???
Well, the answer is easy; I typed ''psychedelic rock'' into the YouTube search bar, and I stumbled upon the last track ''Love'', and fell in love with it. Another favorite is ''Welcome To The Void''.

Now, make yourself a great time, and go listen to the record here.

External Links
For the average listener and for the hardcore fan
Lagt inn av The Great Mippie kl. 12:14 Ingen kommentarer:

The Great Mippie
I am the Great Mippie, and I am a reviewer of great music that you may find on this blog! And if didn't know; my username is combined with two subcultures of the 60's. The mods and hippies

Search in this blog!!!